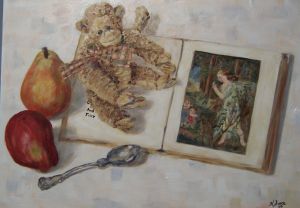 Painted a still life of a few things that inspire ideas.

The Canandaigua Writers Group met recently, and a common theme among the group was that we get easily side-tracked and don’t finish things we start.  A novel becomes a project we work on over years, while other ideas appear in our brain that we have to get written down before they disappear.  A word or two, a visual prompt, or a dream can be the seed of the best poem or book ever written! It’s as if a character has taken up a space in our brain that has to tell us what he, she or it is up to. And who doesn’t think of something, an idea or a mental picture, maybe a memory, and think “I’ll remember that when I get home and start writing about it.”  Sadly, if I don’t pull the notebook out of my purse and write down at least a morsel of information about the concept, I almost always forget what it was later.

There’s also the problem with creativity of how to know when something is finished.  One can always keep going over something and editing and re-editing. Does the poem need one more line?  At some point, we have to allow ourselves to say  “It’s done.  It’s not perfect, but it’s really good.”  Own it.

I’ve started, and hopefully I’ll actually finish, a sort of card catalog.  I’m looking at each of my story and novel document files on the computer, and writing down what the title is, what the computer file name is, and where I am in the process. For example, I’m pencilling in “draft” or “edit” or “Illustrate.”  I’ve discovered snippets of concepts, essays I’ve done, poems I’ve forgotten, and stories who have characters taking up forgotten spaces in my mind. The process has inspired me to start working on at least one of the children’s stories I started some time ago.

I can’t say how successful I’ll be at completing my catalog, but hopefully some of these characters who have taken up residence in my head will tell me what they are up to next.  Good or evil?  Saving or destroying mankind as we know it?  Fairies flitting about a garden making flowers bloom?  Who knows?  You don’t know unless you try, right?

I’d better make a note of that fairy idea, before I forget it…